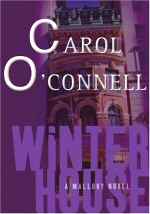 Carol O'Connell's Winter House is a considerable improvement in some ways over the last two books in the Kathy Mallory series. These novels offer two appeals, and the mix varies from one to the next. The first four presented us with a quartet of interesting plots, but read as a single story they also unfolded the character of Kathy Mallory. It seemed that Stone Angel was the end of this second purpose, and that the following novels would pay less attention to it. Certainly the second quartet, completed by Winter House, has played that theme less overtly. Kathy's history is complete, as of Crime School; and now the question is not how she got here, but where she's going.

I've named my essay review of all the books "Watching Mallory Grow a Soul," and that process continues in Winter House, a novel that combines all the best of O'Connell's considerable excellences. There is a puzzling murder mystery: An intruder, a known serial killer, has been killed with an ice pick, but a pair of scissors have been put in the wound to hide that fact. And there is a cold crime Mallory wants to connect to the trivial death of a man no one will miss. An entire family was murdered in the house 58 years ago, and the elderly Nedda Winter is suspected of having committed the crime as a psychotic child of that family. She lives there now, after a mysterious absence of half a century, with her two surviving siblings and a niece, all three of them teetering on mental cliffs, Nedda seeming the most stable of the bunch, an exiled queen come to her kingdom.

The characterization of O'Connell's central characters continues to develop, while other characters –notably the poker club and Lieutenant Coffey– remain stable and complete. Charles Butler is as significant here as Riker was in the previous novel. A great strength of the series is that we care about a handful of these people, not just Mallory. In Dead Famous, it's Riker, not Mallory, whose story we spend most of our emotional energy on, and Mrs. Ortega, Charles' street-tough housekeeper, emerges as someone to pay attention to. In Crime School, our sympathies, like Riker's, are with a woman in a coma whom Kathy inexplicably hates, and we are set up by that conflict for a brilliantly sentimental discovery.

Here the moral center of the story is the tension between Nedda Winter and Kathy, at once adversarial and identification. Where Johanna Apollo was a threat because she was Kathy's opposite, because her training and insight made Kathy's pathology completely transparent, Nedda Winter's ambiguous seniority is clearly one place a woman with Kathy's wounds and defenses may end up. Nedda disappeared the night her family was massacred, and because she was "never found," legends explained her disappearance as death, kidnapping, or flight from a horrific guilt. Famous as "Red Winter," not because it was a nickname (she had bright red hair as child) but because her father painted her nude when she was twelve to create a notorious work of art by that name. Did her father also molest her, as the sensual painting suggests? That question hangs over the novel to the end, sometimes as a vague motive for the massacre of her family.

The novel is full of questions. Did Nedda kill the intruder? Who placed the scissors in the wound and why? Why was he prowling Winter House when he was struck down? Was it, as Kathy insists from the beginning, to kill Nedda? Did Nedda kill her family? And if she did, is she –surely she must be– insane? Nedda was found and quietly returned to the family home after decades in asylums and, finally, a rest home. Who committed her, and why? As the mystery unfolds, O'Connell draws us into deeper and more interesting dead ends of this maze, and the way out, once we see it, is as interesting as any side trip.

As for Kathy's soul: In this novel she is at her least appealing. Previously, we have forgiven her callousness, caught up in the forbidden pleasure of vicarious sociopathy. Told she is loved (by Riker, the Markowitz's, her mother, Edward Slope and, most painfully, Charles Butler), we have loved her. But her loveableness has worn thin, and O'Connell dramatizes this effectively. Watching her torment 70-year-old Nedda Winter, Charles finally stands up to her. He actually closes a door in her face and Kathy, to her credit and education, is shocked and hurt. Her response? To suggest to Charles that Nedda's expertise with an ice pick might make her a less than ideal house guest.

Each of the last three novels has had as a subplot Kathy's jealousy of women her men fell for. In Crime School, she resents Riker's affection for the prostitute Sparrow, and in Dead Famous she actively attempts to sabotage his love for Johanna Apollo. When Riker and Charles take protective stances toward Nedda Winter, Kathy is furious at their "betrayal." And yet she is utterly incapable of reciprocating their affection for her. Here, finally after seven novels, we begin to see Kathy's facade of heartlessness crack under the strain. Here, finally, Riker and Charles refuse to excuse her cruelty, condone her meanness, or put up with her one-sided loyalties.

The process continues, and where it will end is anyone's guess. Nowhere is the identity of Kathy's damaged and dangerous personality more precisely aligned with that of the killer who crosses over a line she drifts toward. Nedda's history is no less awful than Kathy's, and the question, "Is she crazy?" is important to Kathy's future, not just to the case.

As with so many of these novels, the real criminals, and their real motives, are fairly trivial and uninteresting. What we care about is the agon of the central figures –Kathy and the men who love her, Nedda Winter– not the petty money motives that turn out, as usual, to be at the core of a mimed crime of passion.