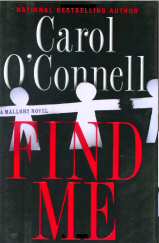 The latest Mallory novel generated some controversy with O'Connell's fans. Does the plot signal an end to the series? Is the story too disjointed, too confusing? As to the first concern, I'm not too worried. There aren't many endings more final than the last pages of Stone Angel, and we are now five books past that moment. Maybe this will be the last Mallory novel. Maybe O'Connell will take a break. The last time she did that, our reward was Judas Child, arguably her best book. With breaks like that, who needs Mallorys?

But the criticisms of the book itself make a good point. Myself, I enjoyed the novel, though my patience wore thin sometimes as the cross-country exploration of Route 66 began to feel repetitious, and it was a bit disappointing to recognize characters from Judas Child dragooned into reprising their schtick — notably Becca Greene, with a pretty unconvincing repeat of something that worked so well there, and a psychiatrist 'way, 'way too reminiscent of Ali Cray's ethically compromised Uncle Mortimer. But these are minor problems, and who doesn't repeat themselves? It's the first Mallory novel that seemed long, I confess. But in some ways, Find Me is a mirror/opposite of Stone Angel, Mallory's other departure from New York into the terrible crawlspace that is her own history. Where Stone Angel is so rich and entertaining that we don't much care how it ends, Find Me provides an ending so brilliant that it excuses the occasional tedium getting there.

Find Me begins with Mallory vanished from New York, her houseguest dead in her apartment. Did she kill the woman? As Riker observes to himself, ponderng the possibility that he's investigating something closer to murder than assisted suicide, "If so, what did the woman do to deserve it?" Mallory is not fleeing a crime scene, though, she is tracing Route 66, her tour guide a handful of letters she got from her dead houseguest. The author? The man who fathered her on a young Louisiana doctor and then disappeared. The "mystery" of why Kathy is on the road isn't all that mysterious, and Riker's ironic speculation has not a grain but a bushel of substance. The reader knows after a few pages that Kathy is looking for her father — in some sense. What we don't know is whether her father is a serial killer also obsessed with Route 66. Will Kathy find her father and then arrest him? Will she have to kill him? By playing an identity game as complicated as the "dead or not" ambiguity that haunts us from the opening pages of Judas Child, O'Connell leaves us guessing till the final pages.

Carol O'Connell has always done an excellent job of making others — not just Kathy and her crew, but the most minor characters — more interesting than the killer. The caravan of grieving parents, looking for children slain and buried on Route 66, focusses into crisp cameos before we settle on one family coping with a unique tragedy. In another respect, she pushes that element to a daring extreme that may be the reason for some of the confusion and disappointment. No way to explain that without spoilers no reader would forgive; suffice it to say that the encounter between Kathy and the killer is one of the most memorable of any endings I've ever read.

Ah, Foolish Love
I gave my favorite Mallory novel, Killing Critics, to a friend to read, and when we were discussing it afterward, my friend interrupted me to exclaim, "You're in love with her."

Well, yeah, Ok. That's my dirty secret. Or it was. I've identified alternately with Riker and Charles over the years. Riker who loves her like a father would and offers the protection she is too blind to appreciate, and Charles who loves her with worse blindness — not merely to the hopelessness of his love, but its pointlessness as well. Kathy Mallory will no more "love" him than a shark would, no less likely to feed on him than on rare beef. And shark she is, as Riker knows. Charles gives "doomed love" new meaning.

It's a relief, in this book, to see Charles finally moving past his infatuation. And I confess that one personal disappointment as I read Find Me was the discovery that I have lived past my infatuation with her as well. Disappointment because lacking the tint affection gives, Kathy is not amusing, far from engaging, unforgivable and unforgiven. She exists merciless in the world of her friends' mercy. That parasitism is an imbalance that needs righting.

So I'm confident there are more Mallory novels to come. Kathy's story is not over; only a writer lacking the courage to continue would quit here.

Like James Lee Burke and a handful of other serious writers in the mystery genre, O'Connell has always had her sights on something more ambitious than producing a fine inflight whodunit. Every book carefully balances Mallory's story with the suspense of tracking the killer, and each book develops the suite of continuing characters. In every novel, the killer is revealed to be a person of no consequence beyond their impact on their victims, no more "interesting" than a shark.

O'Connell's killers are creatures of eccentric banality, to twist Hannah Arendt's famous words. Here is no exception. When we finally reach the confrontation with the man who has spent his life murdering children and burying them on the historic highway, he is neither brilliant nor tormented nor awe-inspiring. He is, in a sense, nothing at all.

The book's title resonates with unfulfilled implication. So many parents, looking for children who can't be found, refusing to accept that the lost child is silent and dead, mirror Kathy looking for the father who will never be real however successfully she touches flesh. And the one character in the novel who will never make that heartbreaking request is Kathy Mallory. She spent years of her childhood trying to be found by the woman her dying mother sent her to. And now, adult and her soul crippled by circumstance, she will not ask us to find her who needs finding so much.

The characters at the center of Find Me are not entirely credible. Two FBI agents so incompetent even the Bush Administration would not harbor therm, a handful of picaresque grotesques who pass through the narrative memorable but not quite believable. A father impossibly oblivious to his effect on his children. The carnivorous morons of the press. For that matter, Mallory herself and her mad entourage of Riker and Charles.

Mallory's world is a cartoon universe, where everyone is a bit simpler and stranger than we are used to in the real world. It is a style, like the cartoons of William Hogarth or Francisco Goya, meant to capture essentials quickly and precisely. It works, but for some readers Kathy — and reality — are too important to be "reduced" to cartoons. Get out of that mindset, and you will enjoy this trip on Route 66.