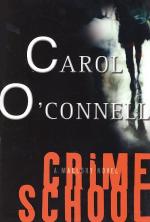 The first four Kathleen Mallory novels were so obviously conceived as a set that the fifth book was in danger of seeming, if not being, a minor afterthought. However, not only was Shell Game a worthy addition to the series, but now a sixth novel, Crime School, continues to develop the characters and backstory with the same excellence the original series conditioned her readers to expect. Shell Game was essentially, until the last harrowing moments, an intellectual puzzle. Crime School returns to the original combination that characterized the earlier Mallory books, mingling Kathleen Mallory's fascinating history with a series of crimes at once gruesome, baffling, and compelling.

Note:
I have posted a bibliography with brief reviews of all Carol O'Connell's fiction, and full reviews of Shell Game, Crime School, Dead Famous, Winter House, and Find Me.

O'Connell has always taken chances with her main character, a potentially dangerous sociopath who became, through circumstances bordering on coincidence, a homicide detective. You may love Kathleen Mallory, but she is not loveable and, most of the time, barely likeable. Here, the thread that binds the story together is her inexplicable callousness toward a prostitute who has been brutally injured and left for dead. The woman, named Sparrow, is comatose by the time she reaches the hospital, her condition hopeless and her death inevitable.

To add to the confusion, we learn quickly, through the observations of Mallory's partner Riker, that the injured woman helped Kathy when Kathy was a homeless street kid. It develops that Sparrow adopted the child, probably saved her life, and was nearly killed protecting her, all more than a decade ago. Riker's own affection for Sparrow borders on love, and he jeopardizes his own career early in the novel to conceal an important secret which could connect her to Mallory. Why? That may be the real mystery of this complex crime novel, and the answer is complicated but convincing.

The first sixteen pages relentlessly portray Mallory's lack of sympathy or concern for this woman, a fierce, loyal survivor who managed to escape from drug addiction and her life on the streets only to fall victim to a serial killer. What is worse, Sparrow was not killed in the attack on her life, but she nearly succumbs through the bureaucratic bungling of public servants. Mallory's callousness is harder even than the shell that caring police officers are said to wear as armor against despair; clearly, she hates this woman.

However, she finds links to a similar crime that occurred twenty years ago and baffled her stepfather/mentor, Detective Louis Markowitz. And then another body is found, a woman killed a week before the attack on Sparrow, obviously the work of what they now know is a serial killer with an elaborate ritual for killing his victims. The new victim, like Sparrow, is also dead because ponderous bureaucracy conspired with an incompetent killer, the former bungling her rescue as badly as the latter botched the murder. Threads of evidence for both the original crime and the copycat serial killings lead to civil servants, including a highly-placed police officer, and a conspiracy of bureaucratic silence stands in the way of solving the decade-old original crime.

O'Connell's New York City is alternately a surreal nightmare and a dark comedy. The "normal" human beings are nearly as alienated and sociopathic as Mallory herself. A busload of Finnish tourists watches the killer stalk his third victim in broad daylight, and they find the drama amusing. A subway tunnel of people angry because they have been inconvenienced by the death of someone who was struck by the train becomes a crowd of revellers when rock 'n' roll music is added to the ambiant. A crowd of fleeing prostitutes is lured back to Riker by their interest in pulp westerns.... Unsympathetic "public servants" leave the frightened third victim helpless, and when the killer finally strikes, a crowd of New Yorkers assume the crime is a department store window display. O'Connell's descriptions are as cynical and dispassionate as Mallory's might be, her rhetorical trademark an almost Olympian perspective on the jungle she is describing.

Rumpled old Riker, we are told to believe, was a street musician with an electric guitar in his teen years, and not least of the hallucinatory images the book conjures up is his performance as rock wild boy in the subway. Because of his eidetic memory, Charles Butler is recruited to speed read and then tell the narratives of a series of terrible western novels to prostitutes in return for their cooperation with the police investigation ("Of the wrong crime," Mallory observes). Through the surreal detail and horrific crime data, what shines from these novels is the love surrounding Mallory. Riker, Heller, Slope, Charles, Sparrow and the "Whores' Book Club", all offer her a gift she is learning, finally, to value. Her confrontation with the serial killer, near the end of the book, is a moment at a psychological mirror, and she sees what we all hope she will see, however darkly. As the novel winds to its last moments, we are asked to dread what's coming, and what's coming is, rather, beautiful, appropriate, consistent, and touching. I called my essay on O'Connell's fiction "Watching Mallory Grow a Soul." Crime School continues this theme.

I had to read Crime School twice to grasp all the twists and turns of layers of plot and flashback. Mallory hates the whore Sparrow for a good reason, it turns out. But her reason, we learn, is not the whole story. When the book is over, we have a full narrative of Kathy's childhood and a new mystery that may never be solved, a question posed by Charles: "Kathy, can you fly?" Is the answer in the second videotape of the green-eyed monster Markowitz and Riker fell in love with and hunted down? Perhaps, or perhaps in the next novel.