Dead Famous, the third novel added to the Mallory series after Stone Angel brought closure to many plot keys, takes this excellent series into some new territory. The focus of the story in on Riker, who has gone on disability after nearly being killed in a confrontation with a killer. In his own mind, he has resigned, but Mallory and the rest of the series ensemble are struggling to get him back on his feet and back on the police force. 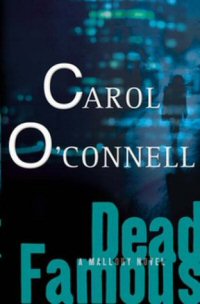 Riker is managing his brother's cleaning business, which specializes in cleaning crime scenes, and this plot thread introduces the central character, the mysterious Johanna Apollo, a woman with a ruined spine and some guilty secrets. Apollo is a psychiatrist in hiding from a serial killer who is rampaging through the country killing the jurors in a Chicago case that freed a murderer.

The novel is obsessed with mental illness, specifically with sociopaths, and the handling of the topic is, as often happens in the Mallory books, a bit over the top and cartoonish. In New York, where anything can happen, the ACLU is protecting the right of a radio shock jock to reveal the hiding places of the jurors so the Reaper can find them. The irony? The shock jock is the man they set free in Chicago.

Riker's assailant, who left him physically and emotionally wrecked, was a psychotic killer whom he is convinced is on the loose again and stalking him. Ian Zachary, the shock jock, is publicly driving the young woman who manages his show crazy. Early in the book, she suffered a mental collapse on the air and no one does anything to help her. Last juror alive at the end is a pathetic little man who believes the mice in his walls "have a radio." Apollo "moonlights" as a therapist, helping the surviving relatives of murder victims. In one scene, Riker meets a young girl Apollo has helped and thinks of Mallory, whose damaged soul might have been healed by similar attention. It is Mallory's burning but not consuming sociopathy that links this all together.

Note:
I have posted a bibliography with brief reviews of all Carol O'Connell's fiction, and full reviews of Shell Game, Crime School, Winter House, and Find Me.

The book even features a psychotic cat, and everyone seems to take the ascendance of psychotics for granted. As a result, some of the action is barely believeable, some of the characters too caricatured to take seriously or be amusing (Riker's father, for example, is neither believeable nor funny). This is to paint a more negative picture of the novel than is fair, though. The powerful last sentence hinges on a revelation that is scarcely credible, yet the end works. The story moves swiftly, and once you accept the somewhat skewed reality of its world, the characters are engaging and interesting. A twist explains the person stalking Riker, and it folds the plot threads deftly back on themselves. The end, with its rush of unwanted deaths, is inevitable and heartbreaking.

O'Connell loves to take chances. She apologizes in a preface to the ACLU, to which she admits membership, but one wonders how her friends at the ACLU would weigh the apology against the savage characterization of the group in this novel. With friends like this, who needs enemies? Her Mallory novels flirt with the occult to account for the inexplicable, and Mallory's own character teeters constantly on the edge of unlovable. (She is, after all, certainly not likeable.) She is a liar, a thief, and a creature of violence. She is pathologically cruel, and pathologically ego-centered, as Johanna Apollo diagnoses in a key conversation with Charles Butler. Loving her is a source of constant pain, as Butler and Riker can attest, and yet we are intended to accept her as a heroine. O'Connell smiles, sphinxlike, from her dustjackets. One is left wondering what we are to take seriously, if anything.