The Badger Who Isn't

The Tanuki Kami. My favorite (I have two) is about eighteen inches tall. It came hand-carried from Japan (as did the other, come to think of it). My son spent three months working in Japan, and he brought back the charming statue that graces my living room. You'll find them everywhere in Japanese iconography, from comic books to antique shops, in advertising and art galleries, as ubiquitous as Coyote and Mickey Mouse. Traditionally, a ceramic one stands at a saké shop's door or in the vestibule like a "cigar store Indian." He's a ne'er-do-well monk, a notorious drunk, a braggart, a practical joker, a stumblebum, and a womanizer: all the endearing traits of reprobates everywhere. 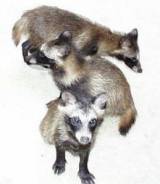 Known to His Lawyers As...

Nyctereutes procyonoides, family canidae. Commonly know as a "raccoon dog," the tanuki is a dog relative, in the sense that the fox and coyote are. (Its relationship with fox and coyote we will come back to.) It is not a raccoon; raccoons are not canids, but procyonids, a tiny family that includes kinkajous, coatimundis and, depending on who you talk to, the lesser panda.

Looking at the picture on the left, three tanuki kits, one scratches his head over the tangle of the mammal tree, because if anything ever looked like the result of crossing a raccoon and a coatimundi, those three critters do. The fox tail is the only clue I see to its real lineage. But that picture makes one thing clear: the tanuki definitely is not a badger.

The raccoon dog is native to Japan and parts of mainland Asia. It fills the niche occupied by the raccoon in the U.S.: scavenging, making a general nuisance of itself, looking "cute," and carrying rabies. They prefer woodlands to open country and are opportunistic eaters (meaning, padlock your garbage). By one of those errors of ecological judgment that belong in a chapter of history titled, "What Were They Thinking?" the raccoon dog has been "introduced" in Europe. This ranks up there with the introduction of rabbits to Australia, weasels to New Zealand (they immediately fell to, as the U.S. National Park Service might put it, "extirpating" the birds), and the cute and mellifluous starling in the U.S. One suspects that the raccoon dog was sizing up the buffet before he finished shaking Europe's hand.

An anonymous site called "JETanuki," somehow affiliated with a teaching exchange program called JET (Japanese Exchange and Teaching), offers a great deal of information on the raccoon dog from the point of view of an American teacher in Japan. The linked page includes a reprint of a published (English) article on tanukis from The Japan Times.

An official distant cousin of the fox (unlike America's raccoon) rather than the badger, the tanuki shares a non-biological characteristic with his cousin. Fox and tanuki are two of the "dangerous spirits" of Japanese folklore. Fox occupies the more demonic role, as a true force of evil associated with witches. Tanuki is more ambiguous, more on the order of the trickster figure Americans have learned to associate with the coyote. 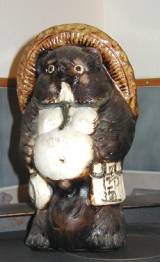 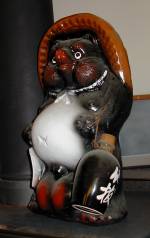 Tanuki Was Just
Goin' Along

The Tanuki Kami, as opposed to the zoologically identified tanuki, is usually presented as an itinerant Buddhist monk or priest wearing a kimono and a traditional straw hat, carrying a sheaf of papers in one hand, a saké jug in the other. His other identifying feature is one that graphically illustrates some differences in Japanese and American sensibilities: The kimono is often left open to reveal a scrotum so big it scrapes on the ground.

The sheaf of papers is a handful of Buddhist prayers, for sale like Christian "relics" were sold by European con men in the Middle Ages, to gullible passersby. A popular Japanese folk tale, "The Magic Kettle," tells of the Buddhist monk who got stuck with a tanuki and ended up teaching it how to write.

Tanuki folklore follows patterns familiar to anyone who knows the adventures of Coyote, the trickster figure from many American Indian cultures. Tanuki gets in a bragging contest with his drinking partner, Fox, and one of them suffers some Rabelaisean indignity at the other's hands. Tanuki takes it into his head to do some stupid thing that seemed like a good idea at the time, and causes hysterically catastrophic chaos and destruction. Tanuki gets ticked off at a land developer and pulls a con game that puts the guy out of business. A famous tanuki story, "Click-Clack Mountain" is retold lavishly in The Daily Yomiuri, a Japanese, English-language newspaper, as "Rabbit's Revenge." It is a nightmare of violence as unnerving as a Grimms' fairy tale or a children's cartoon.

Here is a milder but typical tanuki story, in my paraphrase:
There was that tanuki, one time, who was running along a road, and he passed a snail. The snail was headed for the next village, and it was taking forever to get there, as you can imagine. So he hailed the tanuki because he had an idea.
"Hey! I'll race you to town!"
The tanuki stopped running, he was so stunned. He stared at the snail.
"Me race with a snail?" he said. "You're kidding!"
"You afraid you can't beat me? The bag you're dragging won't help much," the snail said. "Bet you my purse against your jug of saké."
"Ok, smarty, you're on," the tanuki said. And he commenced to run. But the snail hopped on the tanuki's tail promptly when his back was turned. And he rode all the way to town that way.
When they got to town, as they passed the village sign post, the snail shouted out, "Hah! I beatcha!" The tanuki was so startled that he swung quickly around to look for the snail behind him, and his tail smacked the post, which smashed the snail's shell and sent him flying past the tanuki. He landed in the grass beside the road.
When the tanuki turned back around, there, to his astonishment, was the snail ahead of him.
"I got hot, running that fast, so I took off my shell," the snail said. "Pay up."

The usage of "badger" to refer to the Tanuki Kami is sometimes called a "mistranslation." It's difficult to see how that accounts for it exactly. The Japanese words for raccoon dog (tanuki) and badger (anaguma) are hardly similar phonetically, though they may have similar kanji transcriptions for all I know. (Kanji ideograms are based on ideas, not sounds; so the word for "cloud," for example,might resemble the word for "mist" visually even if the sounds of the two words being represented were completely dissimilar.)

A popular tanuki tale translated in Old Stories of Japan (a virtual treasure horde of Japanese folklore in occasionally fractured English) may provide some explanation. The story is listed in the table of contents as "A Raccoon's Bill," and the title on the page itself is "A Badger's Bill"! Not only that, but the two words are used interchangeably throughout the story to refer to the tanuki character, as if they were synonyms. It seems unlikely that the original Japanese story referred to the central character as both "tanuki" and "anaguma," which would be like an American story calling a wolf a coyote sometimes. The translator in this case is clearly native in Japanese, not English, so there is some struggle to decide what unfamiliar American animal is most like the critter in question. Add to that the vagueness of the average educated American about zoology, and you have trouble.

As an example of the aforementioned vagueness, consider that one American site, after correctly identifying the tanuki as the "raccoon dog," goes on a few paragraphs later to "translate" Shogun Tokugawa Ieyasu's nickname, "furu tanuki," as "old badger"! No confusion on the Japanese end of things, I think. For the Japanese reader, remember, it isn't a raccoon or a dog or a badger or a fox mutant; it's a tanuki, which is not an anaguma.

Can't Have Rikki-Tikki-Tavi, Either
If it's obvious that a real tanuki isn't a mustelid, the mongoose presents the opposite situation. What could look and act more like a weasel than Rikki-tikki-tavi, scourge of cobras?

Not only is it not a mustelid, but the mongoose belongs to the cat supergroup rather than with the mustelids and bears in the dog supergroup. I assumed for years that the mongoose was an African weasel. Nope. Neither is the meerkat — a mongoose with bad nerves.

And I know what you're thinking. No, we don't get the binturong, either.

Ironically, it is easy for Americans to fall into the idea of identifying the statuary figure with the badger, since it is clearly a Buddha-like monk, and our badgers, when they take on folkloric roles, are wise old neighbors or crusty hermits. the saké bottle may give us pause, and if we notice that isn't a bag of bowlinug balls below his belly, we may suspect the terrible truth. The actual adventures of Old Man Tanuki showcase the traditional trickster talents, not wisdom and introspection, and Randy Raccoon has more in common with this drunken doggie sot than does curmudgeonly old Squire Badger. Japan's tanuki turns out to share more than just his genes with fox and coyote, his kissin' cousins.

It's been a melancholy education, having to give up the tanuki. Not a mustelid, he still has a place in my heart and on my shelves. When I first saw the folk figure, I was immediately taken in by it, for all the wrong reasons — the very misconceptions I list in the paragraph above. He's not a badger and he's pretty dang disreputable to boot. I try not to think of it as losing an uncle, but gaining a trickster.