Some Notes on Origins 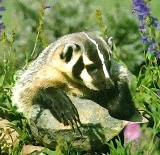 At the beginning of my second marriage I owned the only car I ever named, a "neutered" blue Pinto that I called "Badger." I can't even remember the reason for the name. My friends, more literal-minded than I, called it "The Blue Badger." I had left another car behind in the settlement of a first marriage. It was more badger-colored than the Pinto I'd kept; and when I got stuck with it in the settlement, it became "Big Badger," though the naming was not as heartfelt as the Pinto's. The next major car in my life, a Subaru wagon, was at least badger grey, though it died, many years later, nameless. For me, the Pinto was Badger during its faithful ten years' service and is still.

Badger is a medicine animal, like Bear, for many of the Plains cultures. Kenneth Grahame was onto something when he chose for the sensible, avuncular friend of Toad of Toad Hall (Wind in the Willows) a badger. Even if Grahame's badger was a European badger, that garrulous, community-minded cousin of our American shaman/ascetic, the role suited well. For Brian Jacques (whose books I can't get into, so I speak secondhand), inspired no doubt by the "casting" of Disney's Robin Hood, Badger is a Friar Tuck — sociable but not to be taken lightly.

'Badger' because despite all my affection for wolverines, I identify with badgers. Wolverines carry fierce over the top. Wolverines look for trouble; badgers don't let it phase them. Skunks are too cute; they smile and want to be kitties: Pepe Le Pew rejected again. And weasels have the delicacy of ninjas and razors.

As for the rest — martens, fishers, sables, minks, otters (otters?) — too much baggage or not enough. I toyed with "Pearl Fisher Consulting" when my ex-wife wanted custody of our DBA name. I even made new business cards. But Trudy and I came to an accommodation, as part of the settlement, on ownership of the name.

Why Dancing Badger?
Because when I was seventeen, working as a greens keeper, one morning I saw in the rough two weasels playing (see "Learning Mink," if you're curious).

Because "Crazy Horse" means "Horse Moving in an Inexplicable, Sacred Manner", i.e., dancing. Think of The Doors: "Dance on fire, as it [the music] intends."

Because my ex-wife and I founded the consulting service (and, ever so briefly, a press) together, and she loves very conceivable kind of dancing. She taught me Greek dancing, a form of Zen meditation I can both comprehend and perform.

Because when I taught writing, I told my students, "I can teach you to walk; you have to change it to dancing yourself."

Because badgers move in that crazy way. They rock, not so much bonelessly but as if the bones weren't connected together exactly. They 'trundle,' like Jackie Gleason dancing. And away we go.

Badger and bear, who mind their own business, spend a lot of time just thinking about things, are the wise old ones, loners and mystics, of Sioux folklore. Not family protectors like the wolf and bison, or crafty con-men, grifters, and clowns like the ragtag coyote, they live the spirit quest, the shaman's isolation, and the seer's inward vision.

And they kick butt as needed. My dentist for many years was also a maniac fly fisherman, and I mentioned badgers to him one day. He described the morning he woke up to the noise of a badger trying to figure out how to pull down a string of fresh trout hung too high to reach.

The animal would have weighed as much as a big tomcat — 20 pounds, maybe 30 — and when my dentist shouted at it, it simply ignored him. Menacing it was a waste of time. He finally knocked it unconscious with a chunk of firewood and hurriedly moved his own camp.

Badger: Irascible, grumbling, solitary, its gait deceptively suggesting a fat old person. Those are not an old guy's claws, and teeth that bite. Vardis Fisher tells of a fight his grandfather witnessed, between a badger and a grizzly bear that had cornered it. (The story is fictionalized in Mountain Man and In Tragic Life, and also appears, with the mention of Fisher's grandfather, in a biographical essay somewhere.) The badger bit into the bear's nose and held on. The bear tore it in half to get it off, and lost a hunk of nose in the process. Good jaws. Good teeth. Long claws. Maybe not the best judgment, cornered.

They don't look for trouble. But Bil Gilbert says the reason you find badgers killed on the freeway (seldom, I would add) is that when a badger sees a semi coming at him, he thinks, "Oh yeah?" Not mean, not a troublemaker. Nice and fluffy. Yeah. Lady badgers, smelling flowers, shopping for road kill for the kids. Gentle badger guys, puffing their pipes, claws curled around the meerschaum.

I only saw a badger once in the wild, myself, and it barely counts. I was driving down to Salt Lake, just north of Tremonton, where what civilization there is begins, late at night, and suddenly in my lights was a long, flat thing that looked like the business end of a mop. A hundred yards away, it looked up into my headlights and I knew it for what it was. I swerved to avoid it. It stood still, possessor of the road. I thought of Bil Gilbert's explanation for badger corpses on the road. Her road, her darkness, her highland steppes, her pressed rabbit. Just move along, please.