I've written about major moments I've experienced with mink and weasel. I want to write here about trying to give a beloved niece a moment of her own. It happened at the family cabin on the plateaus above Zion National Park. The cabins, two of them, were literally on the park fence line. In fact, my wife's retired uncle, who lived up there in his neighboring cabin when the roads were marginally passable, loved to tell about watching the deer "migrate" over the fence every year a few days before the hunting season.

The King of Skunks is Jerry Dragoo, featured in the December, 2001, issue of Smithsonian. Dragoo, a biologist at the University of New Mexico, also has the authoritative skunk site, www.dragoo.org.

His site offers a concise discussion of the scientific data on skunks, a pitch for letting his team have the Asian "stink badgers" (that's fine with me), as well as a good explanation of the role of skunks as carriers of rabies (they rank second to raccoons).

The cabin had mice, dozens of them, and my mother-in-law, a farm girl from Raft River who declared war on mice when, as a young woman, she found some cherished lace in storage had been used as bedding and toilet by the cute little things, pursued them mercilessly. It took a few trips before I got used to being wakened in the night by the sudden finger snap of a trap doing its job, and I'll never forget hearing a mouse scream one night when a trap did its job less effectively than one might wish.

In the morning Natalie would gather the sprung traps and deposit the tiny corpses over a rail at a spot that became the mouse abattoir. At night, irregularly at first and then like a scheduled service, we would smell a sudden pungency through the open screens and then hear the high-pitched chatter of skunks under the porch. In the morning, yesterday's dead would be gone. The sounds of the skunks reminded us of the scolding monologues of busy mothers, and we began to speak of them to the children as "mommy skunks" come with little shopping bags to gather up the mice for their babies.

A feature of life at the cabin was cooking outside in a hibachi grill barely big enough for three or four small steaks. When more than one family was sharing the space, we cooked steaks in shifts. My niece Mira was six or so the year when she and I shared the cabin with about a dozen adults, including my step-daughter who would have her own special moment with a skunk later. Mira and I were good friends, even then, and we spent many evenings sitting on the cedar porch. One night, we practiced stillness by trying to tempt a chipmunk to take hulled sunflower seeds from her hand. It worked, and she described to me later the touch of its paw, like ghost needles.

On another night, a day after we had grilled steaks outdoors, we were alone on the porch. Most of the adults were off climbing somewhere, and Mira's grandmother, she of the mouse vendetta, was reading inside. It was twilight, and we were just killing time when we saw a skunk approaching. She came within a dozen feet and then appraised the situation. My theory was that she had come for the evening's mice and was distracted by the delicious smell of charred beef on the grill. Mira and I sat still. The prudent action would be to abandon the field, but Mira had an opportunity to apply the lesson of the chipmunk, and I was feeling brave. The grill was close enough that I could almost kick it over by swinging a foot.

The skunk ignored us. We were sitting less than a yard from the mouse dump, which I'm sure had fresh treasures. And the charred meat — ah, the aroma, ambrosia to a carrion eater, the caviar of leftovers. She could not resist. We sat and watched for what must have been more than five minutes, not moving and barely breathing. We could hear the skunk's teeth scraping the cast iron. She put her delicate hands on the grill to steady herself as she worked. And the smell was no more than a distant pungency, no worse — in fact less noxious — than a neglected barn.

Mira wrinkled her nose. The skunk glanced over at us. I was braced to lift and toss Mira if the skunk presented her armament. She didn't. She regarded us no more suspiciously than a lady making eye contact in a supermarket. She looked thoughtful, and then she finished cleaning the grill. It took five minutes, five minutes of that strange elastic duration that we can never put a number to later, so that in my memory I want to say it was fifteen or more. But that's as unlikely as eternity for a six-year-old, even one newly schooled in patience. 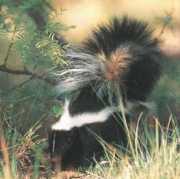 Five minutes then, we watched Mme. Skunk, and then she trundled on her way. She passed directly under us and scrabbled around a bit under the porch gathering the discarded mice.

It was an adventure I'll remember all my life. Some time the previous summer my horse and I had surprised a skunk in an aspen grove and it wheeled, stood on its front feet, and menaced us in a manner no one made fun of. We hustled to one side and were spared. One summer my step-daughter, a teenager with a seriously anti-social edge then, brought a dog to the cabins, which was against the rules, and elected to sleep in a tent with the dog. The second or third night, a skunk found the tent curious and intriguing. The skunk sliced an opening in one wall, stepped inside, encountered a hysterical Dalmatian, and responded the only way it knew was foolproof. That was my tent, and I had to air it out for two years.

A few summers later, a skunk chose to litter under the uncle's cabin, a hundred yards east of us, and Keith watched her march them off to hunt once they were old enough. I never saw them, but even if I had, I think our skunk, the one Mira and I observed that night, would still be the great skunk of my life. Sometimes there is drama in what doesn't happen.