A Year Later: Memory and Story

The most terrible thing about memory is not remembering, but forgetting. In the first days after Crom died, his pictures, and writing about him, were consoling rather than painful. But now, I see the pictures I kept and what hurts is how much they no longer can summon up. We forget, and we can't help it. So I'm glad I had the good fortune to build this memorial, since memorial it is, as much as tribute.

If you live in stories, as I do, there are ways to remember, new memories, if you like, invented to fill naked spaces, and as this painful anniversary approached, I began to write one. I am not religious. That is to say, I don't think anything remains, once life is gone, except perhaps memory like thinning smoke as the brain collapses and the mind leaks away. I don't think Crom, or Fred Manfred, or anyone gone is somewhere else. Worms eat us, or fire. I don't believe there was anyone there, as I lay beside him, my arm on his chest and feeling the terrible silence inside it. I got up and walked away from what was, for me, already ashes. Not what I wanted it to be, but what it was past any appeal to wanting.

Link fills the silences and the lonely places. He sleeps on the bed, which Crom would never do, even invited. He hunts the bunnies, where Crom in his complacence merely exercised them, and that less and less as the bones wore and grew lumps of pain in his knees and shoulders. Link won't bring back a ball, and I laugh sometimes, remembering, and my eyes hurt. He snores at my feet, and I'm grateful that his is a tenor groan, not a haunting bass. We walk where we walked, and it's not the same but it's good. I find, sometimes, relics I'd rather were lost, and memories broadside without warning. There are gaps no one could fill.

Our life is another life, one perhaps neither of us would have chosen but both accept, knowing choice is a luxury that wears out with use. Link has his own losses I can only console him for, and never undo. I imagine them sometimes, when his head lifts and his step quickens at the sight of a deceptively familiar child in the distance. But no, she's not that one. We walk, and people ask, "Where's your other dog?" as if the answer were not written everywhere: "Nowhere."

We aren't waiting to go somewhere else. Lost is gone, and now, such as it is, is all we get to have. So we love each other like last man and last dog, dropped in our separate times on the desert island, only occasionally scanning the horizon: habit, not anticipation. I have the can opener; he keeps the dragons away when I sleep. We collaborate. And we think about waiting. We imagine it, like imagined riches and good food. We imagine finding a place we know we'll never see, because lost is gone.

We know it's not there, anywhere. We know we can't go home. But there are always stories, dreams we can make, imagining.

Another Voice, Half Heard But Recognized

When the scary pain was gone, then it was dark, and I was sleeping. But I woke up, and there was new girls. Two new girls! They smelled good but I was scared and worried by this new place, and one of them had red hair and I thought, "Like my Mom," and wanted to see my Mom but she said, "Just wait," and she ran her hand over my brain like my Mom. She even said "brain rub" like it was my name and she liked me, and I wagged because she was like my Mom and nice. 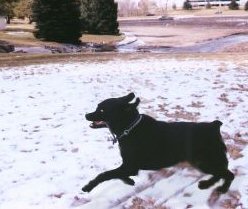 And the other one said, "You will run and not get tired," and I knew it was true, but I got up just to see, and my knees didn't hurt and it wasn't hard and heavy like getting out of water and I saw bunnies. There were bunnies and it was Ok so I chased them and I chased one and it got away but just barely, zigging when I zagged. And that's Ok because I just like to chase them and when it ran under a bush it stopped and looked at me like, "I won. Want to try again?" And I grinned. And there was some bones, and they were mine.

But my Dad was not there. "Not home," I thought but this wasn't home. But it was, and it was inside and outside all at the same time, with grass and bones and a door. My Dad was not there and my Mom and Jeof and the girls, the other ones girls. They were nice. There were rabbits and the girls were grinning so I went and wagged and they came down and scratched my ears and smelled good. My Dad would come, I thought, and they were smiling like it was Ok so I let them scratch and I looked at the door. It was closed and I was a good boy.

But my Dad was not there, and I was worried. "Just wait," the red lady said, and the other one dabbed my eye with her cloth that was blue on her head because it was gucky and she said, "What do you smell?" And I smelled my mother that I lost and she was there and we sniffed and she pushed me, like when I was little and we wagged and sniffed. She wasn't big like then, but I rolled on my back for a joke and she smelled my tummy and I got up and we ran and crouched and ran. It was my mother and she smelled like milk that Dad lets me have sometimes. And yogurt sometimes.

My Dad was not there, and there was a door and he will come home if I just wait, so I tried to be a good boy and got a drink and we ran after more bunnies but I watched the door, just in case. When I thought of the girls they were there, but when I thought of my Dad, he was gone to work. I chewed on bones because it was outside. I rested on the blanket because it was inside, and that was Ok. And I watched the door.

Sometimes I can smell the river, and the ocean, and all the lakes and there they are and the black squirrels tease me and brown. If I want to sniff them it's Ok and not scared. Sometimes there's geese and I run and they fly. And there's cats and they smell good and they aren't scared and I sniff them. And the red lady has my best ball so I run and she looks mad when I don't bring it back but I know she's fooling, like Dad was fooling. I sleep by the door on my blanket when I sleep and I'm just waiting. The bunnies want to play, and I chase them and it's like we are all in a joke so I grin when I stop. I think of my mother and she's there and sometimes others. But not my Dad.

So I stay by the door.