Speaking Dog - An Introduction to the

Grammar, Syntax, and Lexicon of Canine 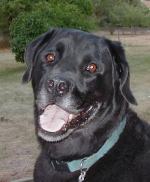 During our nine years together, Crom and I have communicated through a shared willingness to learn each other's language. We have spent many hours studiously mapping English to Canine and vice versa, in the interest of mutual understanding. I learned head angles; he learned verbs. Aside from the imperialist, colonialist arrogance of assigning Crom a name1, I have avoided Crusoe's assumption that he, as the superior creature, should control language. I met my Friday halfway. It has been an illuminating exercise. In the coming weeks, I will try to describe dog grammar for you, then extend the discussion into syntax and vocabulary. My examples will rely heavily on English, of course. By way of introduction, I'd like to offer for your consideration a vocabulary lesson I recently had in this, my second language.

Crom is subject to ear inflammations. They strike suddenly, and they can be virulent.2 They are generally caused by allergic reactions, and they seem to be exacerbated by lying down; they usually strike at night, anyway. I've been wakened in the middle of the night by ear-flapping, sometimes inches from my face, of elephantine proportions.3 There have been nights when no medication helped, and I finally just lay in bed, his chin on the mattress, and massaged his ear canal while trying to rest.

We have an arsenal of medications to combat all the varieties of discomfort, from itch to fluid to bleeding: soaps, hydrogen peroxide, vinegar solutions, salves, medicinal drops, cotton pads of various sizes, antihistamines. I even bought a forceps at one point because I couldn't get Q-Tips long enough for his ear canal.

Unfortunately, he has trouble understanding the connection between the treatment and the cure. Dogs don't use the future tense.4 Unless the relief is immediate (the drops and salves) and painless (forget the Q-Tips, and vinegar burns if the ear is scratched or bleeding), he needs persuasion. So we always celebrate successful medication with a treat of some sort. Even so, getting the medicine in the ear requires some cooperative effort, and it is here, while establishing that cooperation, that I got my recent language lesson.

When we lived in the Great Basin, an allergy caused most of the trouble, and it would usually hit both ears, simultaneously if not equally. During those days, when I was applying some treatment or other at least once a week and often repeatedly in a single day, I taught him to lie down on his side so I didn't have to wrestle him into position before beginning the treatment. Then we progressed to "other side," which I introduced to get him to roll over. It works beautifully. I say, "On your side, babe," and he drops, reluctantly but obediently, to one side. I do the ear. Then I say, "Other side now," and he rolls over.5

Lately, it's become a lot more difficult. Ironically, the ear problem has cleared up quite a bit, so that usually I only need to treat one ear. And of course when I say "On your side," lately he always falls so that he covers the inflamed ear. What a coincidence, I muse ironically before negotiating the "other side."

My ex-wife, Crom's Mom, has an Augustinian view of things, and therefore subscribes to the belief that dogs, as fallen as we, will commit crimes they can get away with. This in spite of the evidence Crom provided, that he chose to be good when he didn't have to be. Glaring at him while he lay there on the wrong side, I began to realize that I was adopting that same umcharitably Hobbesian view of the situation. He knew I wanted the other side. I imagined he was grinning at me maliciously. And I got to thinking, What exactly is the "other side"?

If you were pretending to be my dog, and I gave you the instruction, "On your side," which side would you choose? Would you follow our cultural/physiological bias, and choose the right side, because it's less sinister (more dexterous?). Or would you lie on the left side for some reason I can't predict? Would you think the situation through: He is going to try to ease the pain in my left ear; so he wants me to lie on my right side. If you thought it through, then you would have to choose good or evil, obedience or resistance. "You didn't say my right side, you know!" Assuming that the dog reasons the same way and then chooses to be disobedient is an application of humocentric reasoning.

As an experiment, I cut to the chase one day. I didn't say, "On your side"; I started from "Other side, Crom." Sure enough, I got what I wanted, and we were done. And I learned a new definition of 'other.'

In our discussion later, Crom explained his reasoning. When I said "On your side," that left him the option of picking the side he would prefer to lie on. Of course he always chose the side that let him avoid getting poked in the ear. Wouldn't you? So his 'side', logically enough, was the side he wanted and the 'other' side was the side he didn't. I suspect that he had been maintaining that distinction all along, always lying on the side with the less painful ear first, without my noticing it. I'm sure he didn't always consistently lie on his right (or left), as a human might.

If I had taught him 'right' side and 'left' side, we'd have been fine. Interestingly enough, I tried a few years ago to teach him to go to the left or right side of a bike trail (bikes are our enemies) so that we could avoid getting in trouble for clotheslining bikers with our leash. It was hopeless. Dogs don't get 'right' and 'left.' For one thing, they are quadrapolar, not bipolar like most humans. Once the right/left thing gets clear, they will want to know if you mean front right or rear right, and you end up more confused than the dog. I could have settled for just "side", and taught him that it meant come to the side of the trail I was on. But that wouldn't work, because I would always switch sides if necessary to put the bicycler on the downhill side. Survival technique, and it meant that if he waited to look back, to see which side I was going to be on, he'd get creamed. So I taught him to stand perfectly still. That way, at least, the biker could get around him without vacillating.

The first key to learning a language is discarding your own preconceptions about how they are supposed to work. Some languages don't have future tense. Some don't have pronouns.6 Generalize from your language experience, but remain open to the notion that some folks just might see things differently. Words don't 'mean'; we assign meanings. And our meanings are always a blend of objective and subjective. Crom is right; 'other' doesn't just mean what I thought it meant.