The Spirit Was Made Flesh 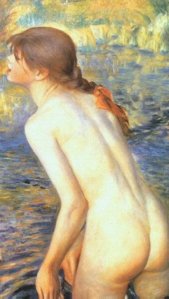 That phrase has been haunting me for nearly a week. I thought it was from John's gospel, partially because I loathe that gospel for, among other things, its elitist spiritualism.

Give me the demotic Jesus of Matthew, Mark, Luke, and Godspell, Vardis Fisher's Jesus Came Again, not the spiritually charged Christ of John, Paul, and Andrew Lloyd Webber and the Gnostics, Nikos Kazantzakis' The Last Temptation. Or better yet, the pagan simplicity that accepts the world as home.

It isn't from the Bible at all, oddly enough. I shouldn't be surprised. My father said to me once, when I was a smartass teenager, "Like it says in the Bible, 'God helps those that help themselves,'" and I said, "That's not in the Bible!" and he said, "Well it should be."

So what is it, this phrase? The Nicaean Creed? I don't think so. The Doxology? I don't know. It's as fixed and clear to me as any quotation: "And the Spirit was made Flesh, and suffered..." It must be the Credo. Not Catholic; the wording there is quite different, though the meaning can be parsed from the Latin. Methodist?

Note: I was mistaken. It is John 1:14, it turns out, slightly misquoted: "The Word was made flesh...." Nothing about suffering.

But as to why it bothers me. It captures vividly the peculiar Western view that the mind and body are separate things. Bodies inhabited by souls like little rentors of some great Landlord. Little 'spirits' from Heaven come down to be our children. For many people, that spirit's arrival in the growing flesh in the womb signals the moment when abortion is no longer an option; when a fetus suddenly has 'identity.' The soul 'escapes' from the body when we die. It can be dragged back by CPR. The 'self' is greater than the sum of its parts and history. The spirit of God is changed into a man of flesh (and then, inevitably, suffers). With the fairly complete secularization of American culture, we may not think these things in this language any more but the essential ideas persist in secular forms.

I had a discussion with a friend recently who thinks of her 'self' is someone inside her body. A bit extreme, but not so different from most people. I don't accept it. My self is my body. My soul is meat and bone, not the breath of life but the breather. The isolation of the self from the physical presence of the person may be the essential error of Western thought. It is a concept familiar to tribal cultures, of course, but we have done something rare and special with it. Body and soul, rental and tenant: the war of the ages.

It is a fundamental distinction, to say that your soul is part of your body rather than 'in' it. What does it mean? Not that your body is more important than you give it credit for. Heaven forfend. In our self-absorbed era, that is not a problem. The idea that the soul and the body are one thing is pernicious in Western culture, in the same way that Lawrence's liberation of sex was pernicious: It doesn't foster growth; it gives license. If your ethical self is coexistent with your physical self, your responsibility to live well now is augmented, not diminished. 'Free sex' puts the burden of responsibility on the sexual creature rather than the law. It doesn't make the responsibility go away. Lawrence used to be driven livid by the trivial "free sex" crowd who considered him their benefactor. Good sex is never free; read his preface to Lady Chatterley. By the same token, the devout worshipers of the Native American Church are not the benefactors of vacuous dudes who are into peyote.

I do not mean to argue that our body is the whole person. What I am saying is that the soul, the self, the persistence of the person, is a physical thing as much as our hearts and brains are, not separable. We are each of us one thing, not two. Not a person briefly or incompletely manifested in the present body. Not a soul in a body, a spirit in a vessel, a lady in a tower, the mind behind the eyes. One thing inseparable as body and skin. 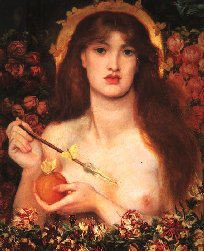 We seem to understand intuitively that a 'dump' of our entire mind would create something subtly different from our self. The fact is, it is not 'subtly' different at all; it is simply different. A photograph of a dog is not a dog, however lifelike. A replicant is not the original, even if it is 'better.' We think the difference is subtle because we work from the religious notion that the spirit, the soul, the 'real me,' is an entity for which the body is a vessel. The body is not a vessel, any more than an apple is a vessel. The essence is not contained but intrinsic.

According to accepted wisdom, animals don't have souls. We don't think that way much lately. Now, instead, we have otherwise sensible men like Noam Chomsky arguing that animals don't have 'language.' Souls are so passé. Cognitive scientists arguing that animals don't have 'self-awareness.' Something. There must be something they don't have; because they must be different from us in kind. We are terrified by challenges to our imagined uniqueness, by the prospect of facing the fact that we are one species of bug on one trivial planet in one off-center galaxy. Animals are not different in kind. Bees talk. Birds think. Mammals love.

My spirit is flesh. Not made; just is.

They have everything we have, in greater or lesser degree. Koko talks; she thinks; she loves her cat; she is a person. We are meat, no more or less than they are, and having a word for 'I' does not make our self special. An animal has personhood. That, ultimately, is the animal rights issue. Is an animal a person, a self? My dog knows who he is. He has a self, defined in his terms, but personal. The notion inspires bad jokes; because we make fun of what threatens us. As long as we believe that the 'self' is not inherent in the thinking body, we can argue about this. As we change our philosophical bases, we change the vocabulary, but not the basic principle. Souls are passé; now animals don't have 'self,' a thing mystically different from mere consciousness. My spirit is flesh. Not made, not separate.

Robinson Jeffers brilliantly imagined the dissipation of consciousness from the dead body in a number of fine poems. Look at 'The Caged Eagle's Death Dream' from Cawdor, for an example. There the idea is romanticized. Elsewhere, he imagines the dying mind losing its grasp of the content of this memory, the meaning of that sensation: collapsing not like an unwound watch but like a wilting plant. This is not necessarily a mechanistic view, Jeffers' or mine, humans reduced to mere masses of chemicals and minerals; in fact, calling it 'mechanistic' is an ad hominem attempt to reduce it to something inherently antipathetic.

We are so desperate to think of ourselves as different from things. An American Indian writer once described Western culture as standing with its back to life, staring into the sky. We are always eager to be elsewhere. The spirit is the body; the future is this instant and no other.